KubeVela 1.5 was released recently. This release brings more convenient application delivery capabilities to the community, including system observability, CloudShell terminals that move the Vela CLI to the browser, enhanced canary releases, and optimized multi-environment application delivery workflows. It also improved KubeVela's high extensibility as an application delivery platform. The community has started to promote the project to the CNCF Incubation stage. It has absorbed the practice sharing of multiple benchmark users in many community meetings, which proves the community's healthy development. The project is now mature to some extent, and its adoption has made periodical achievements, thanks to the contributions of more than 200 developers in the community.

KubeVela has released five major versions over the past year. Each iteration is a leap forward. The release of version 1.1 brought the ability to connect multiple clusters. Version 1.2/1.3 brought an extended system and a more developer-friendly experience. Version 1.4 introduced a security mechanism in the complete process. The release of 1.5 today brings us closer to KubeVela's vision of making application delivery and management easier. Along the way, we have stayed true to the same design philosophy and built a platform that automates the complexity of the underlying differentiated infrastructure without losing scalability. It helps application developers upgrade from business development to cloud-native R&D at a low cost. Technically, it focuses on the complete process from code to cloud and from application delivery to management. It refines the framework capabilities of connecting infrastructure based on the Open Application Model (OAM). As shown in Figure 1, KubeVela has covered the complete capabilities of application definition, delivery, O&M, and management, all of which are based on OAM scalability (OAM Definition) to connect to ecological projects in an addon way. In essence, each definition converts the experience of a specific capability into a reusable best practice module, which can be shared by enterprises or communities through addon packaging.

The blossoming of atomic capabilities in cloud-native is an asset that raises the threshold in the field. Platform builders need to learn a large number of open-source projects and aggregate experience in multiple fields. It often takes months or longer to build a cloud-native support platform for the enterprise. However, the platform often passes the complexity to the application developer, which means they have to learn a lot of additional knowledge. KubeVela's design concept and existing technical achievements may help you quickly enter the cloud-native world. KubeVela's major addon integration specifications and unified application delivery experience in version 1.5 and previous versions have solved the problem of discrete atomic capabilities in the cloud-native field.

The KubeVela addon mechanism has been popular among community users since version 1.2. There are nearly 50 addons in the community addon repository. Nearly 50 developers participated in the contribution of the addon.

Starting from version 1.5, addon developers could have a better experience. Addon definition, distribution, and visual management are all improved. In addition to using YAML to define addons, developers can fully use CUE to define addons if they want a more flexible combination of addon resources and higher-level parametric control. The current specifications for addon definitions include the following parts:

Please refer to the document for details.

Here is an example of integrating the delivery capability of the Helm Chart package. Currently, projects in the community like FluxCD or ArgoCD provide the atomic capability of deploying Chart packages. Their implementations are different, and each has its advantages. For KubeVela users, these two projects can be introduced through addons. As shown in Figure 2, we need to define a standard API for the end user to expose the necessary parameters to the end user according to the specific situation of the enterprise. As shown in Figure 3, according to the standard API, the frontend UI can automatically generate the corresponding interactive page to help the end user easily and conveniently deploy the Helm Chart package. The platform side automatically generates the driver configuration of the underlying capability based on the user's input parameters and addon definitions and intelligently sends the relevant status feedback to the user. These are based on addon specifications, such as integrating FluxCD. This project includes multiple controllers providing different atomic capabilities. First, we use template.cue to define the deployment method of FluxCD and deploy different components based on different parameter inputs. Then, the user experience is defined by definitions and schema directories. Function Interpretation Based on Addon Extensions​

Figure 4 shows the dashboard of KubeVela system operating indicators. The dashboard is automatically generated through the IaC system. You only need to enable the corresponding addon. 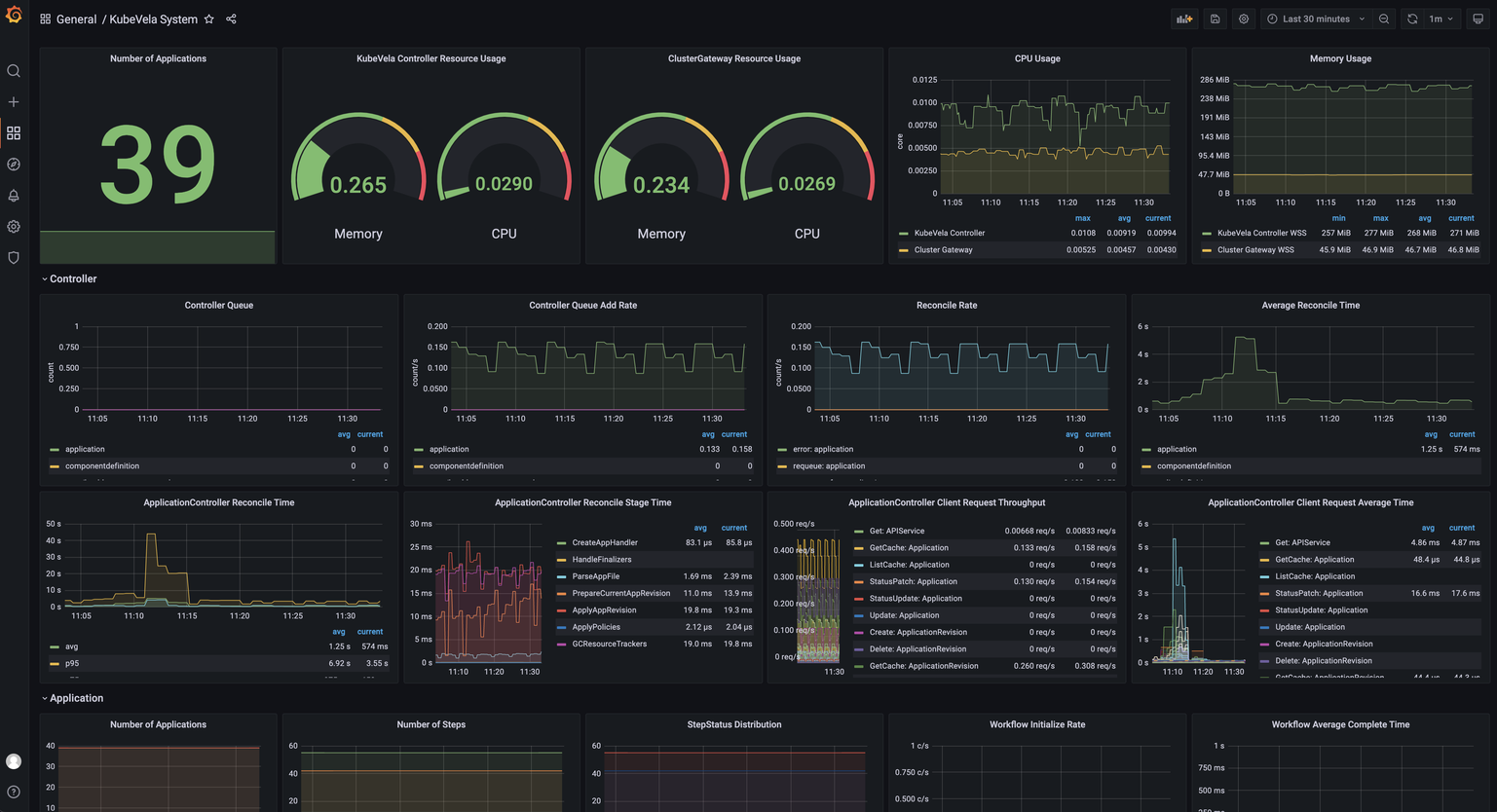 Figure 5 shows the monitoring dashboard of the Kubernetes API Server service connected to KubeVela. Use addons to issue Exporters to all sub-clusters, expose data to the Prometheus service of each cluster, and aggregate it to the control cluster for centralized visualization. You can complete the data monitoring and dashboard access of many clusters at the same time. In the next release, the community will gradually integrate the unified description and delivery of application observability into the application delivery process. It covers Metric, Logger, and Tracing data acquisition, intermediate processing and transmission, storage and analysis, alerts and visualizations, and applications to the complete process of the application release workflow.

Manipulating application delivery through a CLI black screen is convenient, easily replicated, and can be done in batches. Developers are fond of it. Delivering application interactions through UI is more elegant. Process operations help reduce learning costs and achieve stricter enterprise security controls. A high degree of visualization can help us master the application and perform relevant operations anytime and anywhere. KubeVela was very different in the CLI and UI dimensions in the past version, and data in the two dimensions do not communicate with each other. If the two terminal methods can be combined, application delivery and management can be smoother. In version 1.5, KubeVela introduced the CloudShell addon, which provides a Web Shell terminal for UI users. The unified portal solves the problem of CLI and UI separation and brings more capabilities. The main changes to this process are listed below:

The KubeVela community incubated the Rollout project in the early days, similar to the implementation model of Argo Rollout. It works in the form of a new workload, mainly realizing the ability to release in batches. With the development of the community, KubeVela focuses more on the application global control layer and addon extension capabilities. Therefore, the rollout implementation at the workload level has been transferred to the OpenKruise community. With the joint efforts of both parties, canary release capabilities can be implemented for various workloads (such as native Deployment, StatefulSet, and OpenKruise extended workload CloneSet). At the same time, when it coexists with the Helm delivery mode in KubeVela, it can implement the canary release for Helm chart package applications without any changes. This is innovative in the industry and very convenient for users. Kruise Rollout is integrated into the KubeVela ecosystem as an addon. KubeVela users only need to enable addons to configure Rollout Trait in application components. At the same time, it can cooperate with gateway rules (such as Gateway and HTTPRoute). This implementation has the following advantages:

VelaUX has had the multi-environment deployment capability since its launch. Until version 1.5, it supports the differentiation of multiple environments for user visual editing, truly matching the needs of user multi-environment application release. Override Policy configurations support the dimension differentiation of environments, clusters, or namespaces and the unified management of application baseline and configurations..

As shown in Figure 7, the Application Policy has a variety of available options built in, including differentiated configuration, application multi-cluster policies, application maintenance policies, and GC policies. Users can easily configure corresponding policies according to their needs through UI guidance.

In version 1.5, the following convenient features are added before and after deployment for different environments:

In addition to the preceding addon capabilities, a large number of updates have been made to the application engine. The performance is significantly improved, and the CPU consumption during workflow execution is reduced by 75%. The number of parallel executions has increased significantly. The important changes are listed below:

Please refer to this link for more information about changes.