The community has released the new milestone release v1.6 of KubeVela during the 2022 Apsara Conference. This release is a qualitative change in KubeVela from application delivery to application management. It also creates a precedent in the industry to build an application platform with delivery and management integrated based on a extensible model.

After OAM was released, it was welcomed and adopted by many enterprises, including Oracle, Tencent, ByteDance, and 4Paradigm. However, for some enterprises, OAM is a theoretical model with no practical platforms that can be used directly. Thus, it is difficult to land. As a result, Alibaba Cloud engineers joined forces with enterprises that adopted OAM in the community and built an out-of-the-box OAM implementation engine based on common practice. Then, KubeVela was born.

KubeVela was officially released in November 2020 and has always adhered to the design principles of flexibility, extensibility, and separation of concerns. The goal is to connect cloud-native technology components and enterprise-level applications to help developers in the enterprise quickly obtain an easy, secure, and reliable software delivery and management experience. Less than a year after becoming open-source, it has provided core features (such as multi-cluster unified orchestration, infrastructure independence, and application delivery workflow). It officially joined CNCF in June 2021 and was widely welcomed by community users.

Today, KubeVela has been adopted by more than 300 domestic and overseas enterprises, including China Merchants Bank, ByteDance, Li Auto, and Shein. The entire OAM and KubeVela community contains dozens of ecological projects, which have accumulated more than 8000 stars and received many contributions from more than 300 developers from dozens of countries worldwide.

With the development of the community, more enterprises use KubeVela as the core engine of the internal PaaS platform. Based on the unified model and addon extension mechanism at the upper layer of KubeVela, a series of advanced features have been developed, including security, observability, and GitOps. A large number of core contributors have emerged, including China Merchants Bank, Napptive, and JD Cloud. They contribute many new features and addons to the KubeVela ecosystem, gradually extending the boundaries of KubeVela from application delivery to application day-2 management.

This release has four core directions.

Since KubeVela officially released version 1.0 in April 2021, OAM has been continuously verified by KubeVela and gradually stabilized. KubeVela's previous version iterations can always ensure the forward compatibility of the API, corresponding to OAM version 0.3.1. According to SemVer's international practice of naming versions, the version number released this time is 1.6. Although the version number has only increased by 0.1, this release is the overall presentation of KubeVela's application management capabilities since version 1.2 was released more than a year ago. Next, we will conduct an in-depth interpretation of the core functions one by one.

Based on the OAM concept, extensibility and abstraction are the two core features of KubeVela. However, abstraction often represents a black box. Once users encounter problems that are difficult to troubleshoot and can't see the progress and status of resource delivery, management will be more difficult. We have solved the problem of resource visualization based on extensibility in this release. KubeVela automatically discovers Kubernetes native resources and helps users build resource topology maps. You can automatically generate a topology map for user-defined extended resources by describing the configuration of a resource association relationship.

This also means resource visualization is prioritized in the KubeVela system. KubeVela can fully describe the topology, view underlying container events and logs, and obtain the overall delivery status for any workload contained in an application. The following picture shows the resource topology of KubeVela.

In addition, KubeVela provides a top interactive interface for command-line users, which allows users to easily view the status of delivered resources and fully meet the usage habits of different developers. 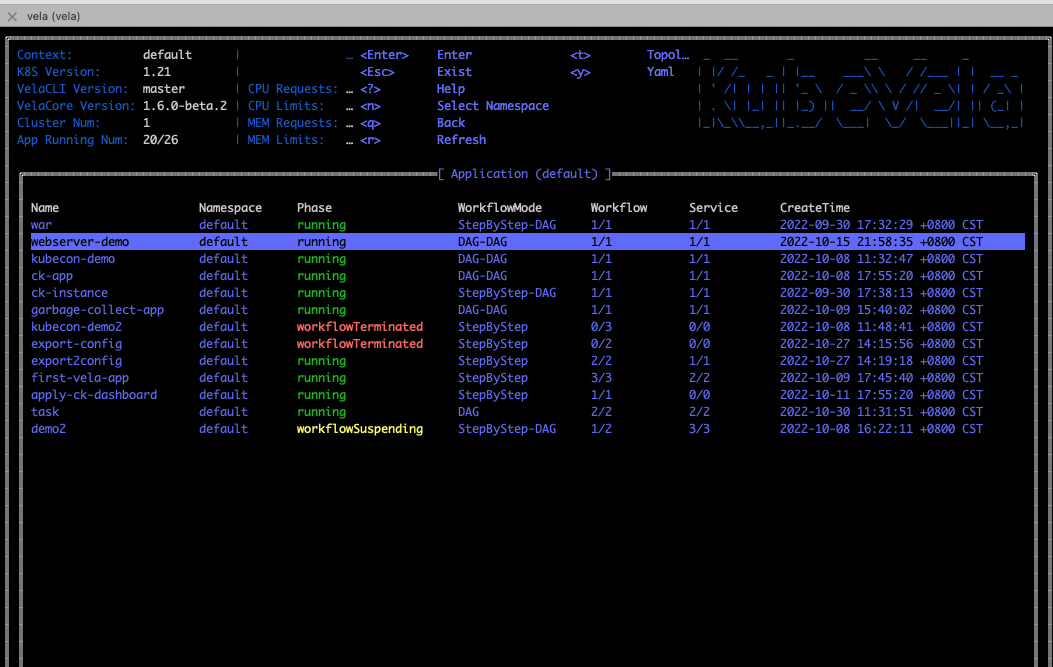 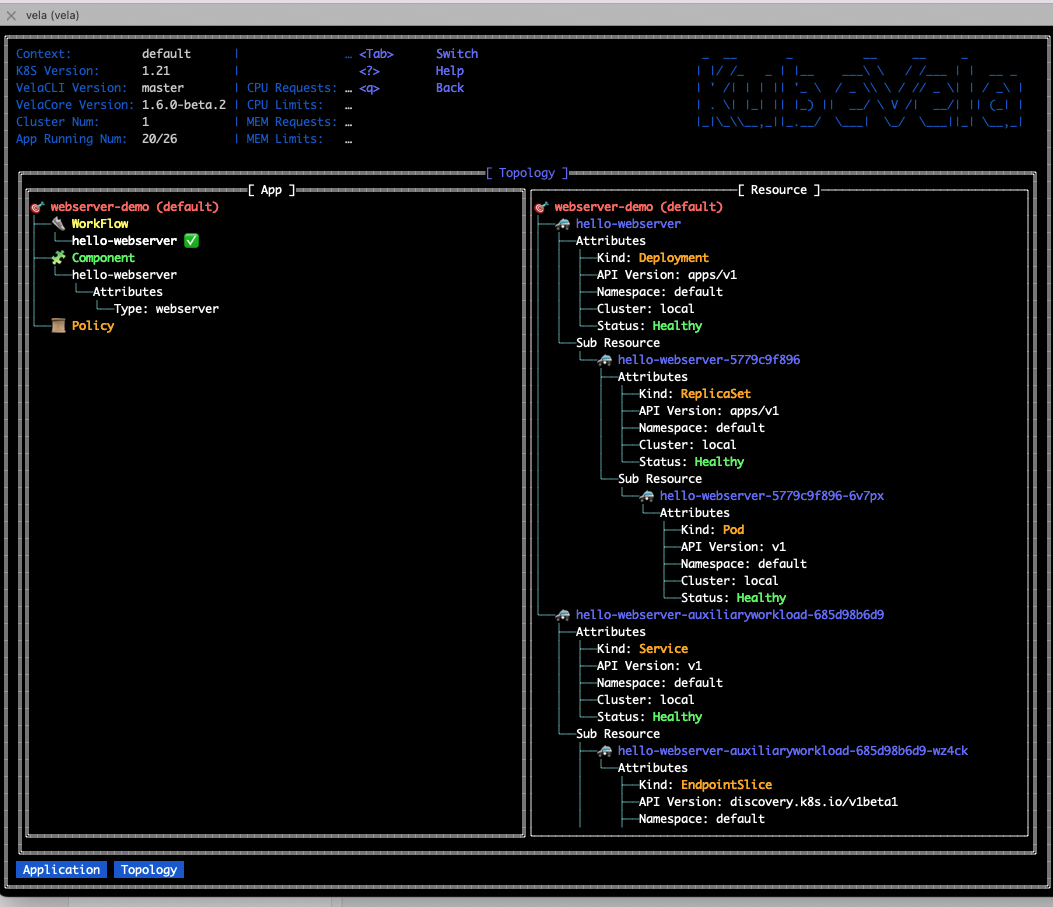 KubeVela's addon system can help users that do not have observability infrastructure create the entire observability software stack with one click. As shown in the following picture, it includes common observability services (such as Prometheus and Grafana) and metrics and log collection for business scenarios (such as mysql-exporter). After the addon is installed, you can automatically see the built-in dashboards of the platform and quickly build the observability application platform.

A major feature of KubeVela is that it drives complete application delivery through a top-level application description (YAML). Observability is no exception. The KubeVela controller automatically generates a monitoring dashboard for the application by selecting the O&M features corresponding to logs or metrics. 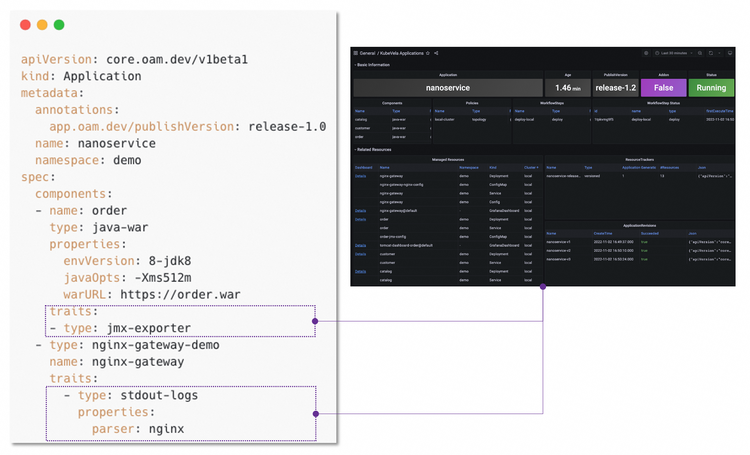 The user portal is an application-oriented dashboard. You can view the component status, version information, and the generated resources in the application. It also contains the dashboard links corresponding to various sub-resources. You can dive into the sub-resources and see detailed information as needed. You can easily understand the full picture of resources from the perspective of applications, whether they are Kubernetes native resources or custom resources.

The ability to support the application observability underlying layer is completed by Infrastructure as Code (IaC). This also means KubeVela has made the full link IaC from metric collection (including log collection), parsing, enrichment, storage, data source registration and the dashboard visualization.

The following picture shows how to create a Grafana dashboard using IaC. The IaC module allows you to ”create-dashboard”. Similarly, these include creating data sources, importing dashboards, etc. These routine actions are fully built-in in the KubeVela community, and you can use them directly without learning details. If you want to do some customization, you can orchestrate your process through IaC to customize observability for your platform.

As shown in the following picture, when using it, we can obtain the built-in pipeline template, fill in the environment context parameters, and quickly execute. The following example shows multiple KubeVela platform addons opened through the pipeline. The KubeVela application is behind the addons.

The Ecology and Future of KubeVela​

This upgrade of KubeVela adds many application management capabilities to the original application delivery, which is a big step forward for the goal of helping application developers obtain an easy, reliable, and secure software development experience.

Today, KubeVela is a Kubernetes-based controller and a platform with many ecological projects. From the connectivity of the underlying infrastructure, and user-oriented interface at the upper layer, to the extensible ecosystem integration, KubeVela is growing rapidly, fulfilling the beautiful vision of OAM at the beginning of its release - to make the delivery and management of applications simpler, safer, and more reliable!